Challenge #1: In ten words or less, summarize any traditional or modern classic novel.

Challenge #2: In four words or less, write a spoiler for any traditional or modern classic novel.

Not as easy as it sounds! But fun. Writers, share below.

Rules: Choose a title that has not already been mentioned in this post, the comments or the graphics, and one that you’ve actually read. Movies do not count! (Graphic not necessary, but certainly permitted.)

Various definitions of a classic (novel):

“A work of art of recognized and established value; the works of ancient Greek and Latin writers and philosophers.” (1)
“A work of literature, music, or art of acknowledged quality and enduring significance or popularity.” (2)
Modern, in this sense, appears to be defined as the “period approximately…from the beginning of the 20th century [1901].” (3) 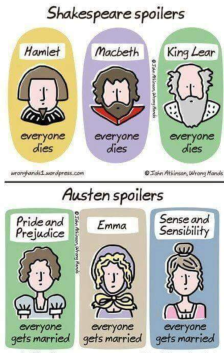