Wednesday’s Wafers: weekly series where I share some of my own recent writing.

Behold: Chapter 4! Be sure to catch up on any chapters you may have missed. 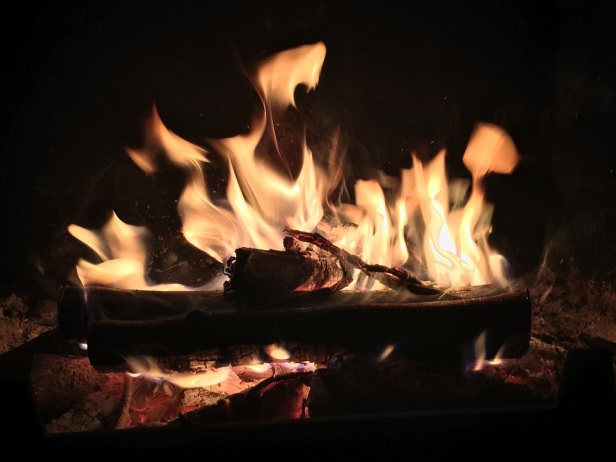 Standing on the step-stool, I brace myself with one hand on the closet’s door frame, and reach up with the other to grab a shoebox off the shelf. Soco is sitting on the corner of my bed, watching me supportively, ready to investigate and play with any object that might fall to the floor.

I step down, scratch her briefly behind the ears, and take the shoebox with me out of the bedroom. Setting it on the kitchen island, I forage for snacks.

A bowl of watermelon cubes and a tall glass of iced tea should hit the spot. Soco is now standing by the front door, holding her leash between her teeth, looking at me expectantly. “Later, Soco, I have stuff to do right now.” I take the leash from her, and open the door, sending her out to roam around on her own. I leave the front door open to let in a breeze and pull the screen door shut to keep out the flying and crawling little buggers.

Armed with both determination and reluctance, I take off the lid of the shoebox and place it on the counter.

It’s been almost two weeks since I started working for Mr. Pagano. I wasn’t any closer to finding out what happened to my husband, but I had gotten comfortable with my work routine and felt that I had already began to build trust with my employer which would likely come into play when the right opportunity presented itself.

I dump everything out of the box onto the countertop. Here lay all the papers and photos and bits of evidence that I’ve gathered that are in any way connected to Morgan’s job and his last few days before disappearing. Check stubs, receipts, notes, mail, printed emails and bank statements, and—what I believed to be the most important piece—a flash drive containing copies of texts, photos, contact numbers, one short video and files.

Approximately eleven months ago, I had been working part time at a local specialty clothing store and Morgan had a job as an armed security officer with a local branch of Absolute Protection Enterprises, newly managed by Mr. Pagano. Morgan’s team had just been hired by an unknown client, for protection services. That was all he had been able to tell me about it.

That weekend, the new branch manager, Mr. Pagano, was out of town and unavailable, according to the receptionist, when I’d called the office looking for information on Morgan’s whereabouts. Since we’d never met or spoke before, he had no idea that I was the wife of one of his previous employees. When I applied for the housekeeping position a month ago, I gave him my maiden name. As I’d been working at Frankie’s Frocks for almost six years, my ex-boss still had me listed in their records under my maiden name, simply because it was easier than bothering to update the paperwork. She was sad to let me go, but happy to give me a reference, agreeing to my condition that she wouldn’t use my married name, or mention my current circumstances.

It was fortunate that Mr. Pagano had neglected to request my social security number to conduct an actual background check, and had relied on calls to a couple references, and on his judge of character.  Plus, as he paid me in cash, there would be no paper trail for him to follow. Even if he had decided to pay via checks, I would still be able to cash them using my maiden name through the bank account I’d kept, even after getting married and opening a separate joint account with Morgan at a different bank.

I picked up a gas station receipt, dated two days before the last time I’d had any contact with him. I’d found it in the pocket of one of his pairs of work khakis. He’d been in Blackfoot, apparently. I had reason to believe this gas station was located within a few miles of his team’s worksite that day, according to a couple texts he’d sent me that were time-stamped only a few minutes after the time on the receipt.

My phone will be turned off once I leave here sweetie. I’ll be at work in a few and will turn it back on when I’m headed home tonight. Love ya, see you tonight.

That night, he’d returned home exhausted and not very talkative. But the sensation of being curled up next to him on the sofa in front of the fireplace, drinking lime-flavored beer from the bottle, was still vivid in my mind.

I eat a few watermelon pieces and take a sip of iced tea. Looking outside, I watch Soco running back and forth, chasing the birds flying from tree to tree as they taunt her. I wonder whether I’m on a similar pointless chase, looking for clues and threads that might—or might not—lead me to answers and some sort of resolution.

The last text I’d received from him was imbedded in my memory, cryptic though it was. I’d read it over countless times, wishing he had given me more, wishing he’d called instead, always missing him fiercely.

E, don’t trust anyone don’t look for me luv you forever angel sorry

I’d followed his mysterious wishes for months, through the initial denial that he was gone, and my feelings of helplessness.

Then, one Sunday afternoon, my friend, Joanne, who works as a waitress at a diner just off the freeway, called.  She asked me, “What was the name of Morgan’s manager again?” Confused as to why she would want to know, I told her I thought it was Mr. Pagano, that I didn’t know his first name. She then told me that she was pretty sure that he had just been sitting at the bar, having lunch and chatting up another waitress, joking about needing a housekeeper and passing out a few business cards. Joanne then went on to describe a blind date she’d gone out with recently, lamenting the guy’s lack of manners and sense of humor.

At that moment, I hadn’t really been sure what to do with the information. I’d filed it away, and talked with her for a few more minutes until her break was up.

That night, as I contemplated the empty side of our bed, I’d decided that this bit of information might be useful after all. Getting dressed again, I’d driven out to the diner, knowing that Joanne’s shift was over and she wouldn’t be there. I sat on one of the stools up at the bar and ordered a slice of lemon meringue pie. I’d been about to ask the waitress if she’d heard anything about the man who was in earlier looking for a housekeeper, when I saw a few stacks of business cards at the end of the bar near the register.

I’d gotten up to check them out, and—sure enough—next to some cards for a local gardening service, there were two cards with the name ‘Nicholas Pagano’ printed on them along with a phone number and nothing else. I snagged one, and back at my seat, had slipped it in my wallet. I finished my pie and drove back home.

Standing in front of Auntie Apple that night, I hadn’t spoken the usual words, but just closed my eyes and let the loneliness fill me up and spill down my cheeks. After remaining like that for several moments, I’d finally opened them again and walked up the stairs to unlock the door.

Even though I’d been happy at my retail job, I’d called Mr. Pagano the very next day to inquire about the open housekeeping position. I couldn’t sit by and do nothing anymore. Instinctively, I’d known that I needed to keep my true identity hidden from him, at least for a while.

Now, as I stood in my kitchen, I focused on the small piece of cloth I’d been holding in my hand. It appeared to be a logo or symbol of some kind, and the edges were torn as if it had been ripped from an article of clothing. I’d discovered it on the floor of the Toyota a couple days after Morgan had been missing and realized that he must have dropped it there on the day during the previous week when he’d taken my truck instead of his because his was low on gas.

It had to be important. I must figure out where it came from, and how it could lead me to the end of this path, no matter what might be waiting for me. I place the piece of cloth back in the box, along with everything else, except for the flash drive.

After finishing off the iced tea, I take the shoebox back into my bedroom and set it on top of the dresser. I walk over to my desk and open my laptop, popping the flash drive into the port, ready to examine everything on it one more time.